Would Banning Firearms Reduce Murder and Suicide? A Review of International Evidence.

An extensive study that I published with American criminologist and constitutional lawyer Don Kates confirms the negative results of previous international studies in 2007. Our study compared data from various countries in Europe. We reanalyzed publicly available data from United Nations studies and the Small Arms Survey from Geneva to examine the link between civilian firearm ownership and homicide and suicide rates. Later I decided to compare the three countries in North America as well.

There were very few instances of nations with high gun ownership having higher murder rates than neighbouring nations with lower gun ownership (tables 1 and 2). If anything, the reverse tends to be the case, for reasons discussed below. For example, though Norway has one of the highest rates of firearm ownership per capita in Western Europe, it nevertheless has the lowest murder rate. Other nations with high firearms ownership and comparably low murder rates include Denmark, Greece, Switzerland, Germany, and Austria. Holland has a 50 percent higher murder rate than Norway despite having the lowest rate of firearm ownership in Europe. And Luxembourg, despite its total handgun ban, has a murder rate that is comparable to countries such as Norway and Austria. 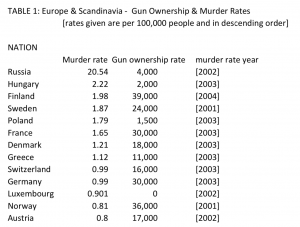 Be the first to comment on "Are gun controls in Europe effective?"