Canada has a gang problem, not a gun problem -- Illegal handguns remain the weapon of choice for gangsters.

My presentation to the Canadian Standing Senate Committee on National Security and Defence on 25 February 2019 follows:

Thank you very much, Madam Chair. Before I start, I would like to apologize. First of all, I’m as deaf as a post. This is bilingual. It works in French, or does not work as well as in English. Second, I’m hopeful that the charts I had asked to be distributed will be distributed. I apologize for them not yet being in your hands.

I’m Gary Mauser, professor emeritus at Simon Fraser University. As part of my academic duties, I have published in criminology and political science for over 30 years.

It is my professional opinion that Bill C-71 is a Rube Goldberg contraption that assumes, without evidence, that multiplying regulations will reduce criminal violence. The government offers concerns but produces no hard evidence.

Bill C-71 myopically focuses on gun crime when a gun is used in less than 1 per cent of violent crimes. The problem is criminal violence, not guns. Knives are used in as many murders as are firearms.

Worse, confusing licensed firearms owners — holders of possession acquisition licences — with criminals, Bill C-71 misses the target completely. At least 1 million Canadians own guns without recourse to anything legal. These are the people that you should control. I ask the Senate to exercise sober second thought.

Bill C-71 will not improve public safety. It is not a small step. It is, in fact, an endangerment to public safety because it misdirects scarce public resources. 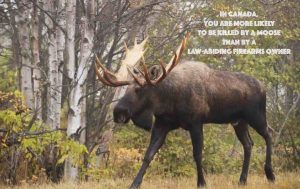 Approximately 16 people die each year in vehicle collisions with moose

Criminal violence is driven by gangs. Gang violence has increased since 2013 — the magic number Minister Goodale picked –while PAL holders have not increased their violence.

At least 10 times as many people die each year from medical mistakes in our hospitals than PAL holders are accused of killing.

The worst mass murder in Canada did not involve a firearm. Gasoline.

Suicide. Even where guns are prolific and readily available, hanging is the preferred method of committing suicide.

Here is a chart for the nation. As you can see, if you had one, the hanging frequency increases and the shooting frequency decreases. Hanging is your problem. Most suicidologists will tell you the problem is mental health and suicide, not access to guns. Healthy people are not suicidal. No one in this room is likely to commit suicide.

Bill C-71 also neglects the overwhelmingly positive contribution PAL holders make to Canada. If you assessed cars, cellphones, sex, marriage and haircuts by only the negative consequences, you would think they were all dangerous and inimical. It is irrational to merely look at the downside of anything.

No evidence has been produced that PAL holders are a major source of crime guns. No evidence has been produced that — significant abuses of the authorization to transport restricted firearms. On average, the number of PAL holders accused of homicide is so small that Statistics Canada is concerned about their reliability. Over the past 20 years, between 13 and 20 PAL holders have been suspected or accused of homicide annually out of 2 million people. Obviously, not all suspects are accused nor are all accused convicted.

As Senator Pratte has demonstrated, the lion’s share of firearms homicide is committed by illegal gun owners. No methodologically valid study has been able to find evidence that stricter gun laws, or even gun bans, have reduced general homicide rates or spousal homicide rates, as my two colleagues have already stated.

A simple example: in 1995, the Canadian government banned over one half of all legally registered handguns. Not only have handguns remained the murder weapon of choice, but gang killings have increased. Gun bans, by the evidence, do not seem very useful. For over 30 years legal gun ownership in Canada has increased but homicide rates have decreased. Bill C-71 falsely assumes criminals get their guns from lawful domestic sources.

The government claims the source of crime guns has changed. This is false. The only thing that has changed is the definition of crime guns. At the height of the long gun registry, StatsCan data showed that only 4 per cent of guns used in homicide could have been stolen or gathered in a straw purchase.

The government cannot provide solid evidence to support concerns about the problems with ATTs, or authorizations of transport-restricted weapons. An access to information request found out that over a million ATTs were issued and 0.05 per cent — less than one half of a per cent — were any kind of abuses. For this you need legislation, or perhaps better management. Requiring additional ATTs diverts scarce political resources.

Internal audits show that there are serious backlogs in data processing for the police. This backlog denies judges and CFOs timely access to vital information. By increasing the paper burden, Bill C-71 will endanger public safety.

This is not a small step in the right direction; this is a big step backward.

To sum up, Bill C-71 is fundamentally misguided. Gun owners are a public safety resource, not a threat. Bureaucratic busy-work diverts scarce police resources away from programs that are more effective in dealing with violent criminals. Inflating the already bulging federal firearms bureaucracy will not solve the real problem facing our youth in gang-infested corners of Canada or help women in abusive relationships.

I respectfully ask the Senate to reject Bill C-71, exercising the sober second thought for which you are well regarded.

We’re just a mosquito, but we draw blood!

Are women at risk from men who own firearms?