The Trudeau government claims “crime guns” come from “domestic sources,” implying that lawful firearm owners are a major source for the guns used by Canadian criminals. This is false. Smuggling remains the primary source for gangsters’ guns.

Concerned that criminals get their guns through “straw purchases” and thefts from licenced firearms owners, the Trudeau Liberals are cracking down on hunters and sport shooters across the country. Bill C-71 is currently in the Senate. Toronto Mayor Tory sees local target shooters are the source of guns for Toronto gangsters.

But how many “straw purchases” and thefts from lawful owners are there? Are there reliable statistics?

What are the facts?

Logically, the responsibility falls on the government to provide factual support for new legislation.

They haven’t done this.

Bill C-71 relies upon unsubstantiated claims. Statistics Canada has admitted that it has no data on the source of crime guns. In response to ATIP requests, the police say they don’t collect the information, despite secret police reports that contradict such claims.

Statistics Canada does not have data on “crime guns,” but it does collect information about the guns used in homicides involving firearms. They have statistics on how many legal guns are used in homicide and how many accused own firearms legally. But, they do not publish it.

To find out, I submitted a series of Special Requests to Statistics Canada.

How many firearms used in homicide were registered?

How many were registered to the accused?

How many were diverted from legal owners (either by theft or straw purchase)?

For a firearm used in homicide to have been diverted from a legal owner it must have been purchased legally [which implies being registered] and then used by another person who does not have a firearm licence. There are relatively few instances of this.

Between 2007-2016, StatsCan reports that only 5% of the firearms involved in homicides were registered and used by someone other than the legal owner to commit murder — this percentage includes thefts as well as straw purchases.

Note, all firearms were required to be registered from 2003 to 2012, so that these statistics include long guns as well as handguns.

The bulk of registered murder weapons are handguns. Long guns account for less than 1% of the registered firearms in firearms homicide during this time period.

Where did they come from?

Why does the Trudeau government ignore gangsters but prefer to focus on law-abiding civilian gun owners? 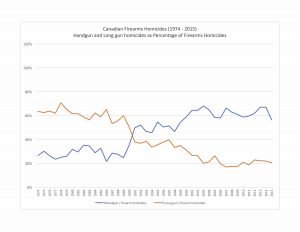 Illegal handguns are the weapon of choice for gangsters.

2 Comments on "Do crime guns come from “domestic sources”?"